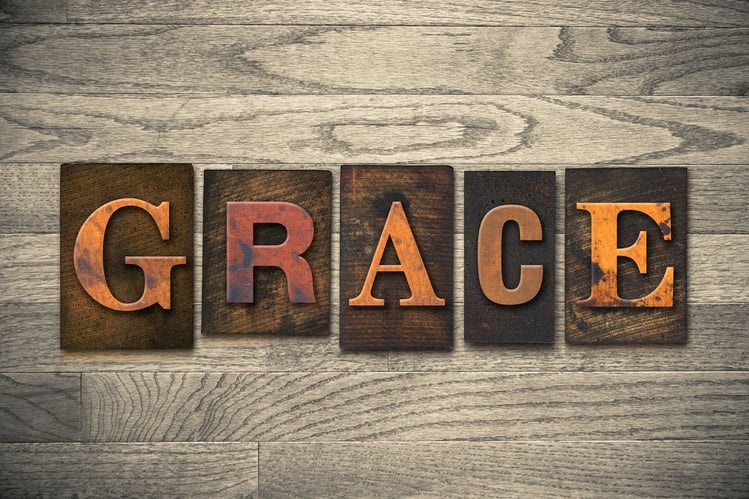 We individually and as a country have great challenges. The Prophet Zechariah explained great mountains in front of us would become plain.

Zechariah 4:6   “Then he [a]said to me, “This is the word of the Lord to Zerubbabel saying, ‘Not by might nor by power, but by My Spirit,’ says the Lord of hosts. 7 ‘What are you, O great mountain? Before Zerubbabel you will become a plain; and he will bring forth the top stone with shouts of “Grace, grace to it!” NASB

The how to make the mountain plain was to shout Grace, grace to the stone, Jesus Christ.

In Biblical times the cornerstone was used as the foundation.  The cornerstone was first.   When the challenge’s come and they have and will.  We need to shout Grace, Grace to the cornerstone, Jesus Christ.   He is faithful to finish what He started, and we must remember that Yes, He was and is first.

In the event, that your family or business was not built on the Cornerstone, be encouraged that you can begin again.   Ask Him to be the cornerstone the foundation of your life, family, or business.

Lord I shout Grace, Grace to the church, communities, and our country, in these trying times.  It will not be our power or mite that solves any problem but Your spirit.  I thank you that you are in control of all things and you are working to make these mountains plain with Love, Truth and Humility.

2 Chronicles 7:14 “if my people, who are called by my name, will humble themselves and pray and seek my face and turn from their wicked ways, then I will hear from heaven, and I will forgive their sin and will heal their land.” NIV

Grace, Grace to you. 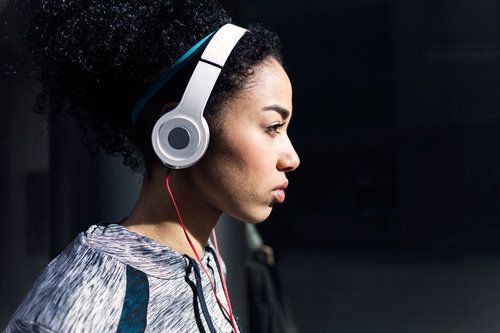 Looking for great upbeat Christian workout music?  Sometimes it can seem overwhelming to find the right music or create the right playlist,  but with apps like Apple music and Spotify it's never been easier to make playlists featuring upbeat christian workout songs. We had a lot of fun putting this playlist together, and finding music that motivates you for running or working out and really helps push you when your workout starts getting harder and you need to stay mentally strong to finish! The tempo and the beats are great, but even more some of the messages in these songs are exactly what you may need to hear to keep your workouts going, they sing about overcoming obstacles and doing hard things and keeping faith. They are really motivational songs that can help you stay the course and keep moving forward.

The following list is our top 8 christian workouts songs with great beats to listen to during your next workout.  If you click on the song title you can listen on YouTube and if you  Click here you can listen to this playlist on Spotify

We really enjoy this playlist, what do you think of about it?  Are some of these songs in your workout mix or do you have any Christian songs you would recommend we add to our playlist? We hope you found it helpful to have a playlist of clean, upbeat faith-filled music. Let us know on Facebook.

The secret is out! There are some pretty amazing benefits of exercise. Not only does it help you control your weight, but research shows that a consistent exercise program can help with back pain, lowering risk of heart disease, diabetes prevention, obesity, osteoporosis and so much more. 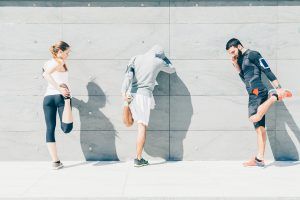 Whether you enjoy group fitness classes, swimming at our Anderson and Indianapolis locations, or lifting weights in the free weight room at any of our 4 locations, LivRite is a great place to meet new people. 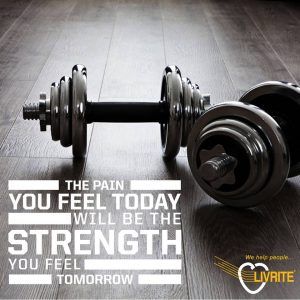 One of the greatest benefits of exercise is that you will quickly learn that it will give you newfound energy. With the busy schedules we all have, low energy is one of the biggest reasons people don’t exercise.  Did you know that research shows people who engage in 20 minutes of exercise 3 times a week experience significantly less fatigue!?

Could exercise be the fountain of youth we’ve all been looking for? Research from PLOS medicine suggests that five 30 minute sessions of moderate exercise a week can add 3.4 years to your life. Out of all the benefits of exercise, this may be the best! 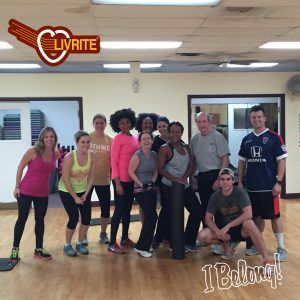 At LivRite Fitness, you, the member, are the success of our company. Our trained and certified staff understand the importance of value, thus we consistently and consciously work toward providing our members with everything they need to meet their fitness goals. We are 100% committed to your fitness needs. We are compassionate in caring for our members and take pride in serving them in a timely, accommodating and consistent manner. At every level in our organization, we do what is necessary to ensure our members meet their individual health and fitness needs, thereby providing them with a high value of investment.

Are you tired of being tired? Contact us for membership details and experience all the benefits of LivRite Fitness for yourself.

Longest, Strongest, and Biggest Muscles in the Body

How well do you know the muscles in the body? 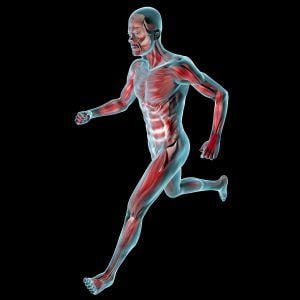 There are 640 muscles in the human body.  Can you name the longest, strongest, and biggest muscles?

What is the Longest Muscle?

The answer is the sartorius muscle.   The sartorius is a superficial muscle that runs the entire length of the thigh and plays a role in flexing the knee and hip.

The satoris muscle is involved in a wide range of lower-body actions so finding ways to strengthen it is relatively simple. You could for a walk or a jog or do squats or a lunges.  Other workouts to try would be lateral step ups, lateral band walks or plie squats. 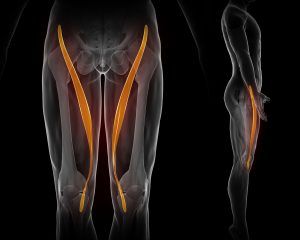 What is the Biggest Muscle? 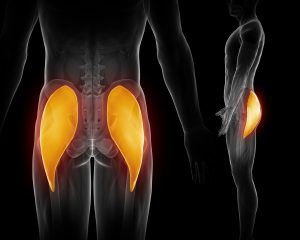 The gluteus maximus. The gluteus maximus is responsible for stabilizing the hip joint and plays a big role in our ability to move our thighs. With a name like gluetus MAXimus it shouldn't be hard to remember it's the biggest muscle in the body.

What is the strongest muscle in the body?

This one is a little more controversial because there are a few different ways to measure strength.  The most commonly accepted answer is the masseter muscle.  This tiny but strong muscle allows us to forcefully close our jaws. 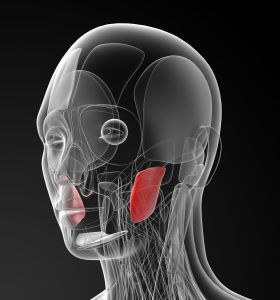 Now that you know the longest, strongest and biggest muscles in the body you are ready to take on Jeopardy. Muscles for 500 Alex. Diabetes is a metabolic disease in which the body’s inability to produce enough insulin causes levels of glucose in the blood to leave the normal range.  The two most common forms of diabetes are Type I and Type II.

How many people suffer from it?

Diabetes has become so prevalent that according to the Centers for Disease Control (CDC) 29.1 million people living in the United States suffer from diabetes and another 86 million are considered pre diabetic.  Nearly a third of all US adults are either diabetic or pre-diabetic.

To be able to understand how diabetes affects the human body it is critical to look at insulin’s role in the process. Insulin is a hormone that helps the body use glucose as fuel for energy.  This hormone is made in the pancreas by beta cells.  If the body cannot make enough insulin to keep blood glucose levels normal then Doctors often prescribe insulin to be administered either by injection or through an insulin pump. 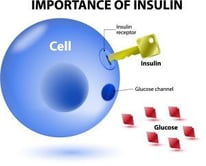 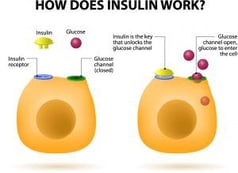 Insulin acts as a key to open up the door that allows glucose to come into the cell where it is broken down and can then be used as energy by the cells.  If there is no insulin or not enough insulin then the “door” that lets glucose into the cell remains locked and the glucose can’t get through and therefore remains in the blood stream.

What is type 1 diabetes?

Type 1 diabetes is predominantly diagnosed in children and young adults.  Type 1 diabetes is characterized by the body’s inability to break down sugars and starches into glucose.  For people suffering from type 1 diabetes, their immune cells destroy beta cells in the pancreas that are normally in charge of creating insulin.  Since the pancreas can’t create the insulin that would normally allow glucose to enter the cells, the glucose begins to accumulate in the bloodstream which can lead to hyperglycemia.  Through the aide of various insulin therapies people suffering from type 1 diabetes can learn to manage their disease. 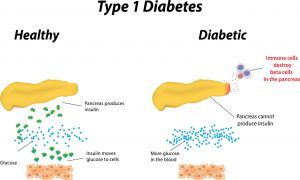 What is type 2 diabetes?

Type 2 diabetes is characterized by the body’s inability to use insulin properly (insulin resistance). To compensate for this the pancreas will try to make more insulin but it won’t be able to keep up and therefore glucose accumulates in the bloodstream. 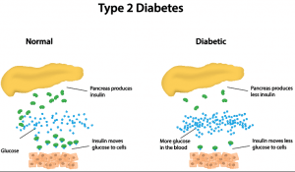 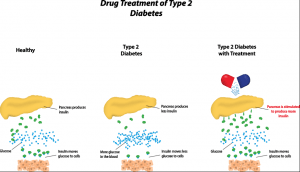 Benefits of Exercise for Diabetics

According to the American Council On Exercise (ACE) type 1 diabetics can reduce their risk of coronary artery disease, improve insulin-receptor sensitivity, and improve functional capacity with a program of regular physical activity.

The benefits of exercise for type 2 diabetics are vast.  According to ACE these benefits include but are not limited to prevention of coronary artery disease, stroke, and peripheral vascular disease.  Regular exercise can also help reduce elevated bodyweight and improve lipid profiles in type 2 diabetics.  Oftentimes weight loss through appropriate diet and exercise can lead to, under a medical professional’s supervision, a reduction in the amount of insulin medication needed.

Type 1 diabetics are encouraged to exercise at least 3 times a weeks and exercise should be supplemented with a consistent pattern of diet and insulin dosage.  This consistency helps ensure glucose control.

It is recommend that type 1 diabetics gradually build up to 30 minutes or more per session.  Long duration activities and high intensity activities should be avoided because long duration exercises can increase the risk of hypoglycemia and high intensity exercises can increase the risk of hyperglycemia.  Weight lifting is recommended for type 1 diabetics without complications.

According to the International Sports Science Association (ISSA), Type 2 diabetics are advised to exercise at a low intensity level and for a longer duration.  Generally speaking, aerobic exercises should be performed at least 5 times a week for 40-60 minutes per workout.  Low to moderate intensity resistance training is also recommended twice a week. According to ACE, a training program consisting of a combination of aerobic and resistance training can produce the best results for type 2 diabetics.

Some Exercise Precautions for Diabetics

If you would like to know more about diabetes, the National Institute of Diabetes and Digestive and Kidney Diseases has some fantastic information.